skip to main | skip to sidebar

Nearly to the end of my 5 part Tea Party series -- today I thought I'd show a few pictures highlighting the decorations and table service that we put together for our Supercalifragilistic Proper English Tea.  If you've been following along with the series you know that the colors we used were lime green, yellow, black/white;  we also integrated a Mary Poppins theme using umbrellas & daisies too.  If you want to catch-up with our tea party series you can check out the following posts:

Thanks for following along--I hope you enjoyed the photos of our decorations!  Now for a quick tutorial for one final element you may have seen on the tables above--a box of "Tea & Conversation Cards"! 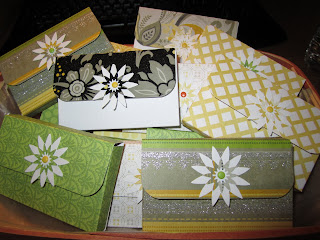 Becca at Amazing Paper Grace has a video tutorial of a similar box she made that is fabulous.  I'll post the link at the end of this post as it may help you to visually create this box, but also give you more ideas for other size boxes.  This is basically the same type of box as Becca's, but I figured out the dimensions a bit differently to hold 30+ "Tea & Conversation Cards" (you could also use these as business card holders).

For the cards I used Business Card sheets for the printer and typed up a variety of facts & trivia regarding the ceremony of tea, adding tea time watermark pictures in the background, and printed about thirty different cards for each box.
For the boxes:
- Cut a piece of deco cardstock 6" x 7".
- With the 7" side against the top of your scoreboard, score at 2 1/4", 2 3/4", 5 1/8", 5 5/8"
- With the 6" side against the top of your scoreboard, score at 5/8", 1 1/8", 4 7/8", 5 3/8"
- Note where the flap of your box will be after you've completed scoring--the smaller of the three center boxes is your flap!
- For the center box on the other end (opposite the flap) use a circle punch to cut a half circle, which will make removing the cards easier.
- Starting on one side at the inside vertical score line, cut from flap edge to the last horizontal score line, and cut off side piece.  Do this to both sides, as in the diagrams below.  It should now look like the shape of a shirt.
- Use a corner rounder to round four corners (or just shape with your scissors).
- Fold on all the score lines.
- Apply strong adhesive to each side of end flaps (far side flaps only) where you cut your circle punch (on the deco side of your paper if you're using one-sided deco cardstock).  Fold box with adhesive holding box shape together.
- Apply a small piece of velcro to flap to create a closure for your box.
- Decorate as desired.  I used Martha Stewart punches to create the flowers for our tea party boxes. 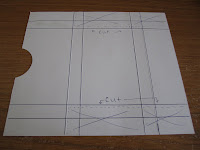 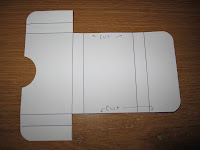 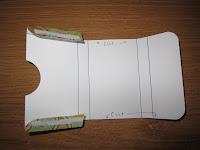 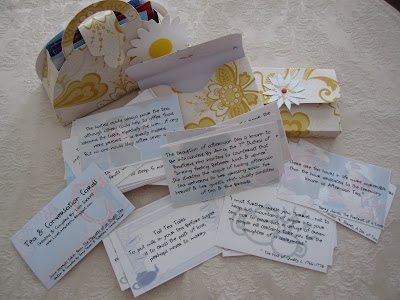 If you're still a bit unsure of this technique, check out Becca's video tutorial for her box...and some other ideas too.
I'll be finishing the series by this weekend with everything finally put together for the main event. Maybe you'll find some inspiration along the way for a one-on-one tea with a friend, or a family get-together, or an office party, or whatever that special moment may be. =)

Blessings for a beautiful day!  Lisa
Noted by Lisa

Thank you for your LoveLee Comments!

Lisa
Illinois, United States
Love my Jesus! Love my husband, my boys, & my grandbabies! I treasure my old gold friendships & enjoy making new silver ones. I am a Paper Arts Instructor who constantly enjoys making a lovely mess of my craft room, and then organizing it all over again. I love hosting tea parties, and like all things girly! A hot cuppa Chai is my relaxing Saturday morning treat. My favorite scripture is Isaiah 43:2. God brought me through so much, that instead of just surviving, I now can live! 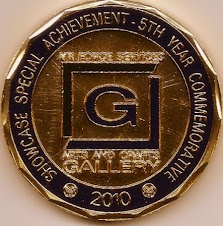